Foam props, lettering, shapes for film and theatre, Plastazote 3D posters and sculptures, closed cell expanded polyethylene foams have been used extensively in the creative and artistic world. Both Ethafoam and Plastazote have been used as theatre and film props for banisters, trees, castles and creatures, to name but a few. The foams are lightweight, durable and are also chemical and water resistant. Ethafoam planks and blocks are available in four hardnesses whilst the Plastazote is available in a range of densities and vibrant colours. The materials are relatively easy to manipulate and form.

3D billboards can have a visual and emotional impact when Plastazote foam is used creatively. Similar effects are regularly achieved in retail window dressing, sometimes as stand alone sculptures or creations, other times as part of the theme or mannequin costume. 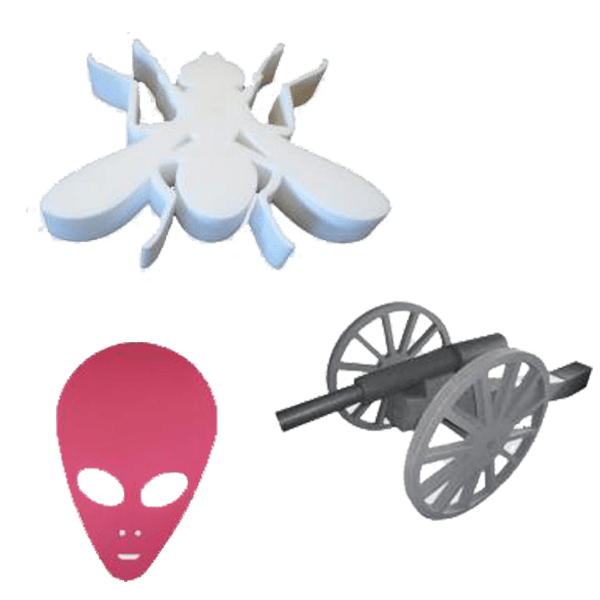 When Jim Henson was working for WRC-TV in the States, he created a puppet show which was the forerunner to the Muppets. During this time, he began to investigate methods of improving the puppet detail in terms of ‘life and sensitivity’. Many puppets at this time were made of carved wood and were, well - wooden! Jim Henson looked into the puppet materials, as well as methods of manipulation and he began to produce puppets from flexible, fabric covered foam rubber.

Many years after this he had developed the Muppets for a weekly television show but the show was rejected by American TV networks. The famous Lew Grade, impresario and managing director of ATV and its US subsidiary ITC financed the show. At this, Jim Henson moved his whole creative team to England. The first episodes of The Muppets were aired in 1976. As the Muppet and puppet development continued, Jim Henson’s Creature Shop team purchased coloured Plastazote foam sheeting from Polyformes to utilise within the workshop for the Muppets. Because the Plastazote can be cut, sewn or formed to hold its shape, it was used, amongst other areas, for the internal mechanics and animation servos which could be housed in the formed hollows.

It was the Creature Shop too who helped produce some of the fabulous models and costumes in the 2009 Spike Jonze film ‘Where the Wild Things Are’. Plastazote was also used in some of these as part of the very involved body suits. Plastazote was used in the Celebrity Big Brother TV show when a Sushi costume was worn by Gareth Thomas, The seaweed wrap was Plastazote as were the prawns!